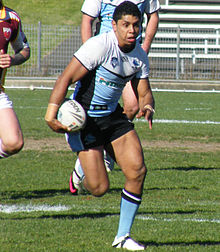 Kelly was born in Macksville, New South Wales and went to Patrician Brothers' College Blacktown before being signed by the Parramatta Eels. He played for the Eels' Toyota Cup team in 2008 and 2009, scoring 11 tries in 23 games before being signed by the Cronulla-Sutherland Sharks. He played for the Sharks' Toyota Cup team in 2010, scoring three tries in 11 games.

In Round 1 of the 2010 NRL season he made his NRL debut for the Sharks against the Melbourne Storm, but played only five matches that year due to injury. He returned in Round 1 of the 2011 season. He scored his first two NRL tries against the Penrith Panthers in Round 3 of the 2011 NRL season. In Round 7, he broke his leg after an attempted tackle playing against the North Queensland Cowboys. Kelly returned for the last two matches of the season. In 2012, Kelly fell out of favour with Sharks coach Shane Flanagan and was sacked mid-season.

Player info and photos from http://en.wikipedia.org/wiki/Albert_Kelly