TheBench™ offers a unique Fantasy Sports experience placing an emphasis on keeping the game play simple, easy and enjoyable while still being rewarding for a dedicated and well researched coach.

AFL has been available on TheBench™ since 2004 and has continued to lead the way in Fantasy games with respect to innovation, game play, flexibility and simplicity.

TheBench™ as a platform supports any number of sports. Currently available public competitions include:

The customisation available on TheBench™ gives you back control of your Fantasy Competition. If you have been running a Fantasy Football competition for your mates on a spreadsheet, TheBench™ is the ideal platform for you as it will support any number of scoring systems, field placements and rules.

Other Fantasy Sports solutions offer overly complicated, time consuming and onerous systems that put all but the most devoted sports fan off. TheBench™ on the other hand will have you screaming out for more.

TheBench™ also allows a very high level of customisation so you can play the game to your rules. If the default wizards don’t give you the power to customise the game to your liking, contact us to discuss more. 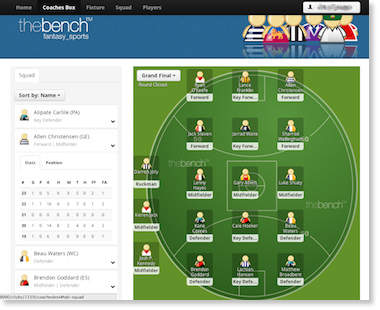 Since it’s debut, TheBench™ has offered an original Draft style Competition. While TheBench™ supports a Salary Cap style game, our bread and butter and focus is the Draft style game.

In the Draft style model, Coaches in a given Competition take it in turns to pick their Squads, one Player at a time. A given player can only be listed in a Squad once. Typically Competitions have in the order of 10 to 20 Clubs. Coaches compete only with the Clubs in their Competition.

A Season typically plays out like this, with some variation between Codes: