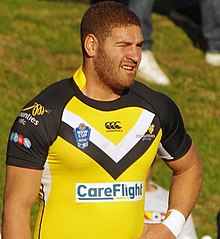 Brenko Lee has not played any of the last 5 games for Melbourne Storm.

Brenko Lee (born 10 October 1995) is a Tongan international rugby league footballer who plays as a centre and on the wing for the Gold Coast Titans in the NRL. He previously played for the Canberra Raiders.

Lee was born in Brisbane, Queensland, Australia.] and Tongan descent.

He played his junior rugby league for the Logan Brothers, before being signed by the Canberra Raiders.

Lee is not the cousin of Cronulla Sharks player Edrick Lee.

Player info and photos from http://en.wikipedia.org/wiki/Brenko_Lee