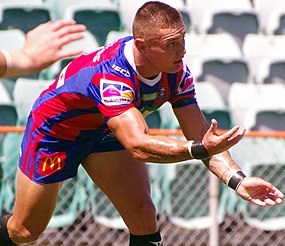 As a hooker for Brisbane Broncos, Daniel Levi is ranked number 29 in the competition. His recent performance has been disapointing with an average of 1.2 over the last 5 rounds, playing . For the season he is averaging 1.2. His consistency has been poor but overall trending in the right direction.

Daniel "Danny" Levi (born 5 December 1995) is a professional rugby league footballer who plays as a hooker for the Manly Warringah Sea Eagles in the NRL. He has played for New Zealand, New Zealand M?ori and Samoa at international level. He previously played for the Newcastle Knights.

Levi was born in Wellington, New Zealand, and is of M?ori and Samoan descent.

He played his junior rugby league for the Randwick Kingfishers. He then moved to Australia and played for the Glenmore Park Brumbies, before being signed by the Newcastle Knights.

Player info and photos from https://en.wikipedia.org/wiki/Danny_Levi