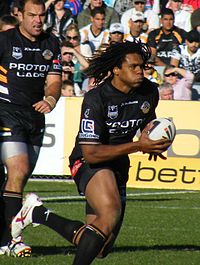 Daine Laurie (born 2 August 1984) is an Australian former professional rugby league footballer who played in the 2000s and 2010s. He played as a prop for the Wests Tigers and Penrith Panthers in the NRL.

Born in Yamba, New South Wales, Laurie played junior football with the Yamba Dolphins before being signed by the Western Suburbs Magpies in the New South Wales Cup.

In June 2008, Laurie signed a 2-year with the Wests Tigers starting in the same year. In Round 15 of the 2008 NRL season he made his NRL debut against the Brisbane Broncos.

In September 2009, Laurie signed a two-year deal to join the Penrith Panthers from the 2010 season. Laurie had been released from his contract with the Tigers and was facing criminal proceedings at the time, having been charged for allegedly assaulting his girlfriend, although the charge was later dismissed.

Player info and photos from http://en.wikipedia.org/wiki/Daine_Laurie