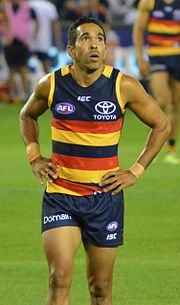 As a forward for Carlton, Eddie Betts is ranked number 44 in the competition. His recent performance has been ok with an average of 7.3 over the last 5 rounds, playing . For the season he is averaging 7.3. His consistency has been poor and trending down.

Eddie Betts (born 26 November 1986) is a professional Australian rules football player who plays for the Adelaide Football Club in the Australian Football League (AFL). Betts was originally drafted by Carlton with pick No. 3 in the 2004 Pre-Season Draft, where he played for nine years before Adelaide signed him as a free agent at the end of 2013.

Betts was born in Port Lincoln, South Australia and raised by his mother in Kalgoorlie, Western Australia. He played junior football for the Mines Rovers Football Club, before moving back to Port Lincoln, where his father lived, to play for the Mallee Park Peckers. While in Port Lincoln, Betts' off-field behaviour was an issue, which included smoking, drinking, drugs and truancy. As a result, his mother arranged for the 15-year-old Betts to move to Melbourne and begin a TAFE program run by Indigenous former footballer Phil Krakouer.

In Melbourne, Betts played football for Templestowe, where he won the EFL Division 3 league best and fairest in 2002, and TAC Cup football for the Calder Cannons. He represented Vic Metro as a 16-year-old in the 2003 AFL Under 18 Championships and was selected in the Under 18 All-Australian team that season. He was too young to be selected in the AFL draft at the end of 2003, and he played another season with the Cannons, but was hindered by osteitis pubis. He was overlooked in the 2004 National Draft as a result.

After being overlooked in the National Draft, Betts was recruited to the AFL with pick 3 in the 2004 Pre-Season Draft by the Carlton Football Club. He attracted attention as a lively small forward during the 2005 pre-season, and made his AFL debut in round 1 against the Kangaroos. He kicked 19 goals in 19 games in 2005, playing as a permanent small forward and becoming a fan favourite. The next year, Betts won the Goal of the Year for his goal in round 21 against Collingwood, a banana kick from the boundary under pressure.

Player info and photos from http://en.wikipedia.org/wiki/Eddie_Betts