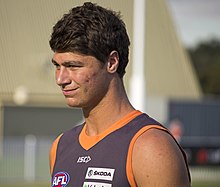 Jonathon Patton has not played any of the last 5 games for Hawthorn.

Jonathon Patton (born 20 May 1993) is an Australian rules footballer with the Greater Western Sydney Football Club in the Australian Football League (AFL).

Patton was taken with first selection in the 2011 AFL Draft. Originally from Rowville, the 197 cm, 101 kg forward played for the Eastern Ranges in the 2011 TAC Cup season and was predicted to be the No 1 draft pick from early in the season.

Patton played his junior football with St Simons Knights Football Club, based in Rowville, before joining the Eastern Ranges in the TAC Cup. He was a member of the AIS AFL Academy and was awarded Best and Fairest for the Eastern Ranges in 2010, going on to be named captain of the squad in 2011.

He attended Nazareth College until Year 11, then completed Year 12 at Rowville Secondary College.

His older brother, Chris Patton, aged 20, currently plays college basketball in Kansas, previously at the College of Southern Idaho, and is set to play in California in the near future. Both have matching tattoos, saying 'Brotherhood', representing their close bond.

Player info and photos from http://en.wikipedia.org/wiki/Jonathon_Patton