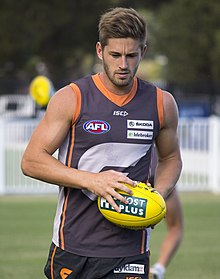 Callan Ward has not played any of the last 5 games for Greater Western Sydney.

Callan Ward (born 10 April 1990) is an Australian rules footballer currently serving as co-captain of the Greater Western Sydney Football Club in the Australian Football League (AFL), having previously played with the Western Bulldogs. Originally playing with the Western Jets in the under-18 TAC Cup, Ward was drafted by the Western Bulldogs in the 2007 National Draft, and made his debut for the club midway through the 2008 season. Having played 60 games for the club, mainly as a running midfielder, he was recruited by the newly formed Greater Western Sydney as part of their pre-entry recruiting concessions. Having been named as co-captain of the club for the 2012 season, along with Phil Davis and Luke Power, Ward made his debut for Greater Western Sydney in their inaugural match, and kicked the club's first ever goal.

Ward nominated for the 2007 AFL National Draft. Leading into the draft, five player managers vied to represent him, and a week out from the draft he decided with Paul Connors, who also represents Chris Judd. He was selected by the Bulldogs with their second selection (#19 overall) at 10.12 am after being a mere 20 days old enough to nominate for the draft.

He made his debut against St Kilda in Round 11, collecting 12 disposals and finishing with one goal. In his debut year, he played six games while juggling full-time football and his last year of high school. He had an outstanding season in 2009 playing in the mould of Tony Liberatore. He tackles with aggression, marks well and knows how to kick a goal. He is a team player and can be used in a variety of positions including a tagging role.

On 5 September 2011, Callan announced that as of the 2012 season, he had signed for the Greater Western Sydney Football Club. He was the second player to announce that he had signed with the Giants. It was later announced, he would be made co-captain alongside Phil Davis and Luke Power

On 24 March 2012, in the Giants debut AFL match against The Sydney Swans, he kicked their first ever goal.

Player info and photos from http://en.wikipedia.org/wiki/Callan_Ward