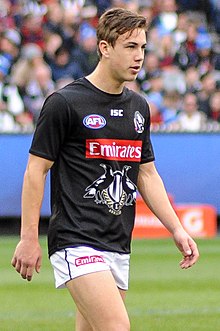 Callum Brown has not played any of the last 5 games for Greater Western Sydney.

Callum Brown (born 27 April 1998) is a professional Australian rules footballer playing for the Collingwood Football Club in the Australian Football League (AFL). Son of 1994–1998 former Collingwood captain, Gavin Brown, Callum Brown played for the Eastern Rangers in the TAC Cup before he was drafted with pick 35 in the 2016 national draft under the father–son rule. He made his debut for Collingwood in round 12 of the 2017 AFL season. In his debut, he recorded 16 disposals against Melbourne in a four-point loss.

Player info and photos from http://en.wikipedia.org/wiki/Callum_Brown