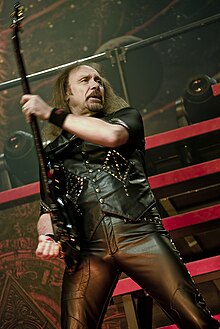 Ian Hill has not played any of the last 5 games for Greater Western Sydney.

Hill learned how to play the double bass from his father, a bass player for local jazz acts. His father died when he was fifteen. In 1970, together with schoolmate K. K. Downing, Hill formed heavy metal band Judas Priest. He has been playing bass with the band ever since, and is the only original member continuously in the band from the beginning, following Downing's departure in 2011..

During the early years of the band, he played bass by finger-picking, but has since preferred to play with a pick.

Hill is responsible for bringing Rob Halford into Judas Priest. The two met while Hill was dating Halford's sister and mentioned that he needed a new vocalist for his band. Halford accepted, leaving his previous band Hiroshima, and brought along drummer John Hinch, who would later be dropped by the band after one album due to "musical inadequacy", according to Judas Priest's website.

Player info and photos from http://en.wikipedia.org/wiki/Ian_Hill