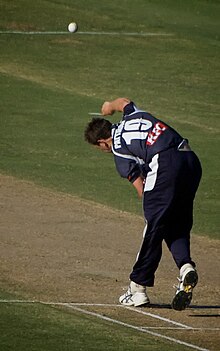 James Lee Pattinson, or simply known as James Pattinson, (born 3 May 1990) is an international Australian cricketer who plays for Victoria, and for Australia. After making his Test debut in late 2011, he was out of Australia's Test side for nearly two years before returning to the side during the West Indies' 2015 tour of Australia. On return, he took five-wickets in the second innings, as Australia defeated the West Indies by an innings and 212 runs at the Bellerive Oval, his second five-wicket haul in the ground.

Pattinson played for Dandenong Cricket Club in Victorian Premier Cricket and also played for Australia in the 2008 Under-19 World Cup in Malaysia.

On 23 December 2009, James broke the record for Victorian One Day cricket by taking 6 for 48 off 10 overs with 1 maiden, despite his efforts Victoria still lost to NSW at the SCG.

Player info and photos from http://en.wikipedia.org/wiki/James_Pattinson