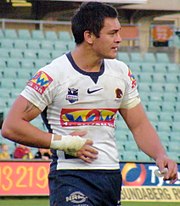 As a back row for Brisbane Broncos, Alex Glenn is ranked number 58 in the competition. His recent performance has been disapointing with an average of 2.1 over the last 5 rounds, playing . For the season he is averaging 2.1. His consistency has been poor and trending down.

Alex Glenn (born 31 July 1988 in New Zealand) is a professional rugby league footballer of Cook Island descent for the Brisbane Broncos of the National Rugby League (NRL). A New Zealand international representative forward, he plays a utility role with the Broncos with whom he has played his entire NRL career with to date.

Glenn, a Northcote junior, captained Brisbane's Toyota Cup team in 2008 and played for the Junior Kiwis in their victory over the Junior Kangaroos in Wellington in 2007.

Since moving up to first grade, Glenn has become a utility for the Broncos, although in late 2009 he was covering for centre Justin Hodges on the right hand side of the field with Israel Folau. Glenn proved he could also play lock in 2008, leading his Toyota Cup team from the number 13 jersey. In 2009 he played in 24 NRL games, standing down in Round 25 vs the Dragons to an ankle injury. Glenn is often a back-row regular, usually joining Sam Thaiday at second row and Corey Parker at lock.

In Round 14 2011, Glenn became the youngest ever Broncos captain, aged 22 in the absence of Darren Lockyer.[citation needed] Glenn scored a try as they defeated the Raiders 25-24 in golden point extra time.

Player info and photos from http://en.wikipedia.org/wiki/Alex_Glenn