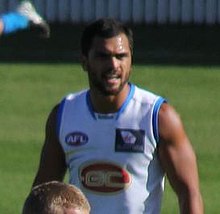 Having played professional rugby league, rugby union and Australian rules football, Hunt was the second person (after Ray Millington) in Australia to reach an elite professional level in three different football codes.[citation needed] He was born in Auckland, New Zealand, but has represented Australia in both rugby codes after his family emigrated there when he was aged 11.

Hunt made his debut for the Brisbane Broncos in the National Rugby League (NRL) in 2004 and won the Dally M Rookie of the Year award. Primarily a fullback, he played for Brisbane until 2009 and was part of the Broncos team which won the Grand Final in 2006. In a controversial move, Hunt chose to play for Australia instead of his native New Zealand, citing a lifelong dream of playing for Queensland in the State of Origin series. Hunt's performance in the 2006 NRL season resulted in his selection for Queensland and Australia (the Kangaroos) in 2006.

In July 2009 he signed a three-year contract with Australian Football League expansion team, Gold Coast, whose inaugural season was in 2011. In 2010, while contracted to the Gold Coast, he played a season with Biarritz Olympique in the French Top 14 rugby union competition. After beginning his AFL career, Hunt was named in the Courier Mail 2011 Queensland Australian rules football Team of the Year. Overall, however, his 4-year stint in the AFL received mixed reviews, though one highlight was when he kicked the match-winning goal against Richmond which broke the club's twelve-month winning drought.

Player info and photos from http://en.wikipedia.org/wiki/Karmichael_Hunt