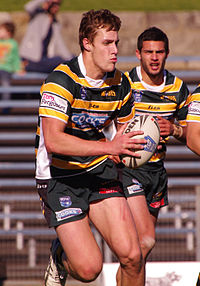 As a back row for Penrith Panthers, Isaah Yeo is ranked number 41 in the competition. His recent performance has been ok with an average of 2.3 over the last 5 rounds, playing . For the season he is averaging 2.3. His consistency has been poor but overall trending in the right direction.

Born in Dubbo, New South Wales, Yeo played his junior football for St Johns Junior Rugby League and Dubbo CYMS before being signed by the Penrith Panthers. Yeo played for the Panthers' NYC team in 2013. Yeo played in the Panthers' 2013 NYC Grand Final 42-30 win over the New Zealand Warriors.

In Round 1 of the 2014 NRL season, Yeo made his NRL debut for the Panthers against the Newcastle Knights. Yeo scored his first career try in the Panthers' 38-12 win over the Parramatta Eels in Round 12, 2014. On 9 July 2014, Yeo was selected for the NSW Residents team to play against the QLD Residents team at Suncorp Stadium, Yeo was selected at centre and scored a try in the NSW 24-16 loss. Yeo finished his debut year in the NRL with him playing in 10 matches and scoring 2 tries for the Panthers in the 2014 season.

Player info and photos from http://en.wikipedia.org/wiki/Isaah_Yeo