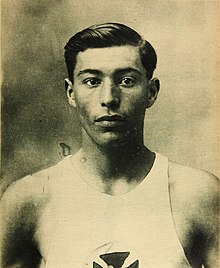 Manuel Plaza Reyes (March 17, 1900 – February 9, 1969) was an athlete from Chile, who won the country's first ever Olympic medal by finishing second (silver medal) at the Men's Marathon in the 1928 Summer Olympics in Amsterdam, Netherlands. He clocked 2 hours, 33 minutes and 23 seconds. He also finished sixth in the marathon at the 1924 Summer Olympics.

Player info and photos from http://en.wikipedia.org/wiki/Manuel_Plaza