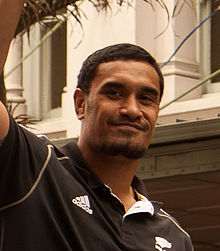 Jerome Kaino (born 6 April 1983) is a American Samoan-born New Zealand professional Rugby union player. He plays for the Blues in Super Rugby and All Blacks internationally. In 2004, he was named IRB International Under-21 player of the year. In 2011, he played in every match of the Rugby World Cup as part of the All Blacks, being part of the first All Blacks team to win the Rugby World Cup since 1987. Kaino is also the second American national of Samoan descent to play for the All Blacks. The first was Frank Solomon in 1931.

Kaino was born in Faga'alu on the island of Tutuila, American Samoa as the third of six children. In 1987 at the age of 4, he and his family moved from their home village of Leone, Tutuila to Auckland, New Zealand. After settling in Auckland, he played junior rugby league for the Papakura Sea Eagles before switching to rugby union in secondary school at Papakura High School and Saint Kentigern College where he was offered a rugby scholarship. If Kaino had not come to New Zealand following the lead of his uncle, his parents assumed that he would have ended up in the US Army.

Kaino made his Auckland debut in 2004 and his Blues debut in 2006. In 2012 it was announced that Kaino would be leaving the Blues for Japanese club Toyota Verblitz on a two-year deal.

Player info and photos from http://en.wikipedia.org/wiki/Jerome_Kaino